A Review of “Recreating an Age of Reptiles”

“Recreating an Age of Reptiles” by Mark Witton

Visit a museum to marvel at the fossils of dinosaurs or the majesty of the prehistoric mammals on display and in all likelihood, the scientific exhibits will be accompanied by illustrations that depict how the animal may have looked when it lived and breathed.  The art of bringing to life long extinct creatures requires a very special set of skills, an understanding of comparative anatomy, an ability to interpret fossil evidence combined with the flair to create credible portrayals of the past.  These “palaeoartists”, those who attempt to reconstruct prehistoric life, are a rare breed.  Top-quality palaeoartists are even rarer.  Step forward Dr Mark Witton, a leading exponent of palaeoartistry, a person with the required skill set to comfortably straddle both scientific and artistic worlds.

An insight to how Mark depicts landscapes along with the ancient animals and plants that once existed within them is provided in a fascinating new book – “Recreating an Age of Reptiles”.  The publication focuses on the Mesozoic Era and highlights the way in which this talented illustrator recreates prehistoric fauna and flora. 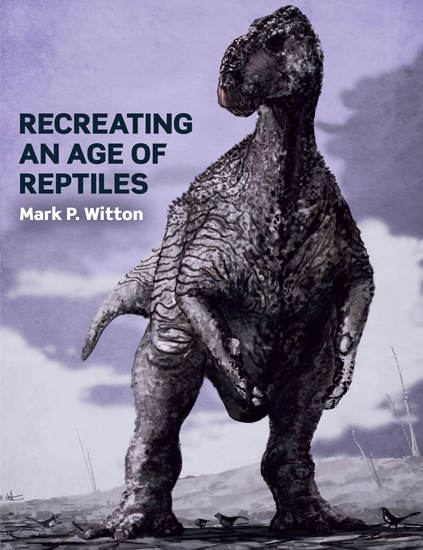 The front cover of “Recreating an Age of Reptiles” by Mark Witton.

The Art of Illustrating What No Human Being has ever Seen!

From the lumbering Barilium dawsoni (an iguanodontid), adorning the front cover, to the swimming pair of Plesiosaurs that appear just prior to the comprehensive index, this book is crammed full of wonderful illustrations that cover that immense period of geological time from the Triassic to the end of the Cretaceous.  Over ninety beautiful and extremely detailed paintings are featured and the author provides an insight into each one, explaining how inferred behaviours are portrayed.   From sunbathing troodontids, through to a remodelling of Dimorphodon and accident-prone Theropods, Mark’s unique style helps to bring to life dinosaurs and their contemporaries and depict them as animals interacting with their environments and the other fauna and flora that co-existed with them.  It is truly a rare gift being able to provide a glimpse into long vanished worlds, that no human has ever witnessed.

Big Meat-eating Dinosaurs Did Not Have Everything Their Own Way! Published by The Crowood Press “Recreating an Age of Reptiles” is just one of those “must-haves” for anyone with an interest in dinosaurs and prehistoric animals.  For further information and to purchase this book: Recreating the Age of Reptiles by Mark Witton

Dr Witton might be best known for his work on the Pterosauria and there are a number of flying reptile illustrations in this book, (look out for the iconic azhdarchid/giraffe comparisons), but it is his attention to detail and the way in which Mark utilises his observations of animals alive today that elevate these illustrations above those of fellow artists.  For example, there are many different interpretations of Baryonyx (B. walkeri), but Mark chooses to recreate this gigantic piscivore muscling in on a prime fishing spot at the expense of a group of ancient crocodilians, in a similar way that a large lion might oust a group of Nile crocodiles from the water’s edge. The book is divided into a series of chapters, with each one focusing on a different aspect of Mark’s work and a different group of prehistoric creatures.  Amongst Everything Dinosaur team members, personal highlights include the chapter on how Mesozoic mammals are depicted and the section that brings to life some of the more bizarre reptiles that lived during the Triassic.

Dr Witton concludes by reflecting on how palaeoart has evolved and changed to accommodate new ideas and scientific thinking and admits that many, if not all of his own sumptuous artworks may have to be altered and redrawn as new scientific evidence is presented.  Palaeoart reflects our changing perceptions of prehistoric life.  The way we depict ancient landscapes changes as science itself changes and new ideas and theories find favour.  Mark is comfortable straddling the scientific and artistic worlds, he is equally at home depicting moments in the lives of long extinct creatures, snapshots into the evolution of life on Earth as palaeoart itself evolves.

“Recreating an Age of Reptiles”

To purchase a copy: Recreating the Age of Reptiles by Mark Witton