Plesiosaurs roamed the seas for much of the Mesozoic.  The fossil record demonstrates that this group of long-necked, round-bodied marine reptiles were highly successful, with a global distribution and a geological record of some 135 million years or so.  However, ever since Mary Anning discovered the “sea dragon”, plesiosaur fossil at Lyme Regis in 1823, scientists have puzzled over how these animals actually moved through the water.  A team of scientists including Dr Adam Smith (Nottingham Natural History Museum, Wollaton Hall), have used computer modelling to recreate plesiosaur locomotion.  It turns out that these extinct creatures most likely used their two front flippers to effectively “fly” through the water, much in the same way as penguins and turtles do today. 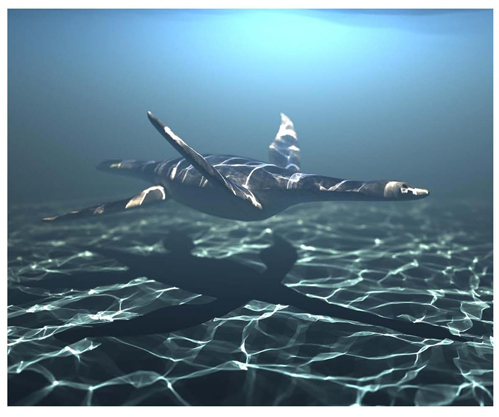 Plesiosaurs are part of the Sauropterygia, taxonomically a Superorder which was defined by Richard Owen in 1860 and encompasses a diverse range of marine reptiles such as the nothosaurs, the Pistosauroidea and the Plesiosauria.  Although the Sauropterygia consist of a myriad of marine reptiles with many different bauplans (body plans), they are united by having a modified pectoral girdle designed to provide support for the powerful strokes of the front flippers.  It seems that in some of the Plesiosauria at least, this modified pectoral girdle and other anatomical adaptations permitted these animals to swim primarily with the forelimbs, using an unmodified flight stroke to “fly” through the water.

Throughout that long evolutionary history of the plesiosaurs,  a unique body plan with two pairs of large, wing-like flippers was maintained, but just how these animals propelled themselves through the water has remained a controversial subject.   In this new study, published in the open access publication “PLOS Computational Biology” the researchers adopted a novel approach using a digital, three-dimensional, articulated computer model to simulate the actions of this type of marine reptile swimming.  A large number of simulations were conducted to test the efficiency of various swimming methods and the team concluded that within the biologically possible range of limb motion, the simulated plesiosaur moved primarily with its forelimbs using an unmodified underwater flight stroke, in essence, the same locomotion method found in extant penguins and turtles. Surprisingly, the computer model demonstrated that the rear flippers flapping added little to the forward speed of the plesiosaur studied.  Instead, the back flippers of plesiosaurs were probably used for steering and stability, a sort of underwater version of rear wheel steer and front wheel drive.

“Plesiosaur swimming has remained a mystery for almost 200 years, so it was exciting to see the plesiosaur come alive on the computer screen.  Our results show that the front limbs provide the powerhouse for plesiosaur propulsion while the hind limbs are more passive”.

A Bar Chart Comparing the Forward Speeds Achieved in the Simulation Rear flippers don’t seem to contribute much to velocity.

In the table above the velocity of a typical plesiosaur was calculated over a series of joint ranges (wide, medium and narrow).  Measurements were taken when forelimb-only flapping, hind-limb-only flapping and both pairs of limbs together were flapped.  Note that the forward speed in the forelimb-only tests are superior or broadly equivalent to the velocity achieved when both pairs of limbs moved together.  When hind-limb-only optimisations were tested the speed was greatly reduced.

Interestingly, these swimming speeds are relatively slow given the length of time these creatures had to evolve.  Elite human athletes can swim at around two metres per second for short periods.  Although plesiosaurs are likely to be much more agile in water than a person, the velocity recorded in the computer simulation is much lower than we, at Everything Dinosaur would have expected.  Most fish would have easily been able to swim faster, perhaps, as most palaeontologists predict, that long neck holds the key to the hunting strategy of the plesiosaurs.

The species used as the template for the computer model was Meyerasaurus victor, known from the Lower Jurassic of Germany.  This small (3.5 metre long), plesiosaur is known from an almost complete articulated skeleton which is on display at the Natural History Museum of Stuttgart (Germany).  Meyerasaurus had a typical body plan amongst the Plesiosauria, with a moderately long neck, so it was considered to be an ideal candidate to represent the clade.

The research team  hopes to modify their computer programme to assess how the rear flippers helped in the manoeuvrability of these marine reptiles.  Just how agile were plesiosaurs in water?  The computer model can also be used to better understand the swimming motion of other prehistoric animals such as the short-necked plesiosaurs – the pliosaurs.

Everything Dinosaur acknowledges the help of the press release from the Georgia Institute of Technology and Dr Adam Smith in the production of this article.